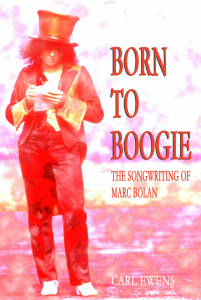 Subtitle: The Songwriting of Marc Bolan

Marc Bolan’s mind was unusual in the extreme and the sound of his music was equally unique and extraordinary.

What was the inspiration behind the peculiar musical avenues Bolan explored with first his far-out hippy folk-duo Tyrannosaurus Rex, and later the irresistible boogie-machine known as T.Rex?

What were the antecedents of Marc’s sound, and the arcane influences on his fantastical lyrics?

This book explores the early beatnik attitudes of Marc’s first musical experiments, the increasing sound-palette with which he explored the eastern mystical worldview of his Tyrannosaurus Rex albums, and the motivations behind his rise to superstardom in the seventies, his ascension to the throne left vacant by the Beatles, and his eventual flirtation with fashion, drugs and alienation.

Author Carl Ewens also attempts to re-evaluate the later T.Rex albums, especially 1974’s Zinc Alloy And The Hidden Riders Of Tomorrow, the point at which Bolan tried to reclaim the lost legacy of his early lyrical adventures. With his star waning and the critics out for his blood, Marc attempted to re- create T.Rex as first a soul-funk band, and eventually as mutant punk rock.

No other British songwriter has ever been so original or so isolated in style, so simultaneously decried and worshipped. No other artist is so quintessentially English and yet so obviously obsessed with Americana.

There is no doubt that Marc Bolan was truly born to boogie.