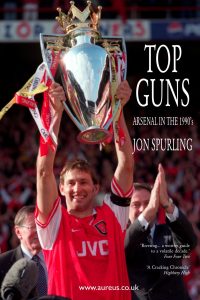 Top Guns documents the triumphs and heartaches of Arsenal Football Club during the 1990’s, the most successful decade in modern times for one of Europe’s top clubs. Several of Arsenal’s major personalities speak openly in the book. Anders Limpar and Alan Smith tell the stories behind George Graham’s early ’90’s successes. Bruce Rioch speaks for the first time about his bizarre sacking in 1996. Top Guns is an indispensable guide to the drama and controversy surrounding 1990’s Arsenal, covering the 1991 title triumph, the Graham sacking and the Double of 1998.

Those ten years were the most thrilling and turbulent in the club’s history. Fans were treated to a cascade of silverware, and watched the scoring exploits of the club’s most prolific striker – Ian Wright. The Gunners’ greatest post war talent – Dennis Bergkamp, helped to push the team’s style of play onto a higher plane and captain Tony Adams marshalled a defence whose longevity defies belief. But as Arsenal charged headlong into the digital age, so the Taylor report, the Graham affair, the Bond Scheme and the impact of Sky T.V. strained many fans’ relationship with the club. Heroic deeds on the pitch combined with upheaval behind the scenes; it was to be the story of Arsenal in the ’90s.

This is Jon Spurling’s second book. His first book All Guns Blazing – Arsenal in the 1980’s has been equalled with hard-hitting and gritty narrative.

Reviews for All Guns Blazing – Arsenal in the 1980’s ‘Expertly written. True Arsenal fans will love it’ Ian Trevett, Highbury High ‘Enjoyable… well written. It seems that Highbury has always been a soap opera.’ Total Football ‘A compelling reminiscence for any Arsenal fan who stood on the North bank through the 1980’s… writes only as a true fan could.’ Shoot Monthly.

Jon spurling certainly doesn’t hang around. Just a mere nine months after his excellent All Guns Blazing: Arsenal in the 1980’s hit the shelves, comes the follow-up – an impassioned retelling of a decade where Arsenal relentlessly ricocheted between triumph and trauma.

As much as the 1990s will be remembered as the decade of Manchester United’s almost inexorable imperialism, in their shadow, the Gunners managed to rack up six major trophies (it seems that only Liverpool count Charity Shields as major trophies), reaching two more European finals along the way. The second most fruitful decade in their history.

But it’s the tales of drugs, booze, bungs, prison bars, and baggage theft that makes for such a riveting soap opera. Complete with idols of Herculean stature (Tony Adams, Ian Wright), heroes who came from zero (Andy Linighan, Steve Morrow) and messiahs-come-pariahs (George Graham) it’s a wonder no-one’s snapped up the rights to Arsenal: The Movie.

Told by a fan who was on the terraces through all the highs and the lows, Spurling mixes well-detailed and colourful journalism with moments of emotional partisanship. For instance, an Adams red card is described as “a cretinously over-the-top reaction by a cretinous ref'”.

Fan recollections combine well with carefully-mined autobiographies and interviews with leading stars if the era including Paul Davis, Alan Smith, Anders Limpar and Bruce Rioch. The latter is the most insightful, as the dour Scot confesses he knew the board were talking to Arsene Wenger during his tenure.

Though Top Guns is a very worthy guide to a volatile decade, the book is out-jumped by its predecessor. Access to players from a more recent era, many of whom are still connected to the club, was obviously a problem and compared to twelve interviews in All Guns Blazing it’s a far thinner story. It’s still as good a version of events as you’ll get at the moment, but it feels rushed and you sense there’s more to come out in the wash. Damian Hall