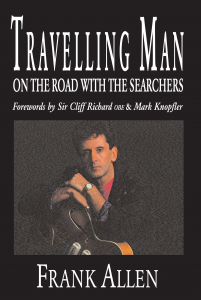 Subtitle: On The Road With The Searchers

Frank Allen, front man and bass player with the legendary group The Searchers takes an irreverent look at globetrotting around the world as a superstar rock musician with the famous 60’s band.

From the Falklands to Bosnia Frank’s account is both humorous and informative and makes great reading for anyone who is interested in The Searchers or music of the 60’s. Travelling Man is filled with stories.

The early days at the famous Star Club in Hamburg with The Beatles who were on the brink of immortality. And his first embarrassing meeting with a young, acid-tongued John Lennon.

The astounding American package show that performed six times daily for a week and boasted a lineup that included The Searchers, Dusty Springfield, Millie, Marvin Gaye, The Supremes, Martha and the Vandellas, The Ronettes, The Temptations, Smokey Robinson and The Miracles, The Shangrilas and a host of others.

And how Frank turned down the chance to be the father of Dusty Springfield’s love child.

The pages include a bevy of intriguing characters. The Filipino minder who wanted to kill the roadie.

The barmaid who possessed a bosom on which you could land a helicopter. And the lady agent who was ‘the face that lunched a thousand shits’.

Frank describes what it is like to land in war-torn Bosnia on the very day the UN commenced the bombing of Sarajevo, and how it feels to pound out your thirty-year-old hits to a hangar full of nineteen year old squaddies.

You can also find out why he describes sex for him as being ‘like a dog walking on its hind legs’.

This book is not just an insight into the travelling life of a pop group. It is written with an impish sense of humour that will have you chuckling in your seat.