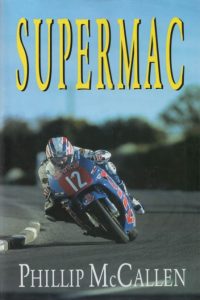 For the first time, legendary motorcycle road racer Phillip McCallen tells the gripping story about his fight to the very top of one of the world‘s most dangerous sports.

‘Supermac’ is the life story of one young Irish lad‘s burning ambition to become the most successful racer the world has ever seen. Written from this champion‘s big heart, it charts his rise from humble beginnings to international fame and fortune.

Here is the inside story on some of the greatest road races ever seen at Ireland‘s North West 200 and the world famous Isle of Man TT races. From the living nightmare of being accused of causing a fatal accident and the battle to clear his name, to extraordinary recoveries from appalling injuries, Phillip McCallen’s story is a revelation and an inspiration.

He tells of the terror of coming out of a coma to find he was both blind and crippled, his incredible recovery and comeback to record breaking race wins, against the toughest opposition and all the odds.

This is a compelling story of grit, courage, tragedy and triumph, a telling portrait, told with humour, of what it takes to win in the gruelling and unforgiving world of international motorcycle sport. The eleven times TT winning Northern Ireland legend holds nothing back in this self portrait of a modern day sporting hero.